Danbooru OS and an anime Danbooru

Another thing which caught my eye today, 4walled (also NSFW, images are from 4chan); just keep scrolling and keep finding awesome wallpapers...
Posted by akuyume at 4:31 AM 1 comment:

Is it not logical that when you're making a spread that is supposed to be squeezed out of a small opening you would make a point reducing the size of fruit chunks in the spread? Well apparently that didn't occur to Welch's, as their spread as several large chunks of strawberry which cause the opening to be blocked. Quite frustrating.
Posted by akuyume at 5:33 PM 1 comment:

I've decided to declutter this blog; and thus I've moved my latest favorite category, anime reviews, to their own blog. Check it out and follow along at Akuyume's Anime Blog.
Posted by akuyume at 11:39 PM 1 comment:

[ARIV] Welcome to the NHK 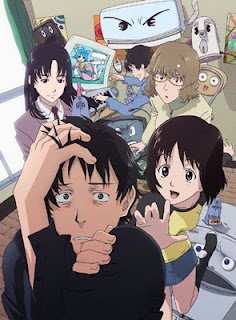 Welcome to Welcome to the NHK! (N・H・Kにようこそ！) No, we're not entering anything related to the Japanese national broadcaster Nippon Housou Kyoukai. This, is the Nihon Hikikomori Kyoukai, although apparently by the end of the show the H is interchangeable but lets not go there.

The show follows the life of hikikomori (recluse and acute sufferer of social-withdraw and severe social anxiety) Tatsuhiro Satou. Laden with a few weightier topics, including pyramid schemes, drug abuse (only present in the anime for one character), conspiracy theories, suicide, and Comiket (okay listing that one here was a joke, laugh, I command you). With all of these themes NHK manages to be delightfully entertaining dark comedy. As all the characters have major psychological problems going on I'm tempted to compare it to Evangelion. Some have gone as far as comparing it to The Catcher in the Rye.

Character development is particularly enjoyable, maybe this is a factor of the depth of problems the characters have but nevertheless the characters do feel quite real for the length of the series. And plot clinchers were quite effective on me; and the ending of the series is full of quick twists and given the amount of dark comedy, its actually a little surprising, but I won't ruin it for those who haven't seen/read the series. 8/10.
Posted by akuyume at 10:31 PM No comments: 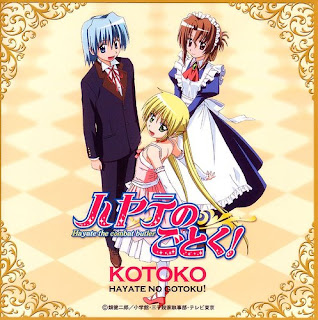 I've had my eye on Hayate no Gotoku! for a while now and I've finally decided to check out the first episode of the second season ala Crunchyroll. Three and a half minutes into the episode and female lead finally opened her mouth; this show is definitely gonna be afflicted (in my mind, at least) with a severe case of "Hey, It's That Voice" as Nagi is voiced by none other than Rie Kugimiya, or Shana of Shakugan no Shana. Hmm and both are associated with maids with Western names (Shana's mother-like Wilhelmina and Nagi's actual maid Maria). 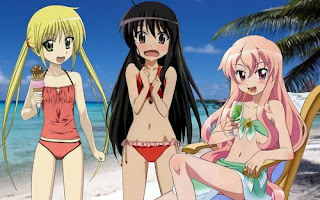 <rant>Three tsunderes at the beach, sounds kinda scary, and it would sure be confusing with all them having the SAME VOICE. I haven't seen Zero no Tsukaima but for some reason I've got a feeling I know exactly what Louise's voice sounds like. But lets face it, Rie and her voice are about as typecasted tsundere as Ben Stein is typecasted boring.</rant>

Back to the show now! Well at least it sounded a bit less like Shana when she only said urusai once! ... Moving on. Margery Daw's seiyu, Hitomi Nabatame, plays the part of another drunkard, one of the teachers at this strange school.

Having already seen Clannad I can say that I am slightly experienced with Key's habit of tying supernatural forces into their harem/romance animes. However this time around in AIR, its definitely more prominent, at least thus far.

One thing to hit my mind is that the main character does have a vague resemblence to Tomoya of Clannad. But that's not their only similarity, as both seem to have an ability to be surrounded by strange single females whom they then help on a quest to normality. So far dinosaur-girl still says "gaou" every other line. On the other hand he seems to have fixed the girl I was starting to think might have been possessed.

Don't get me wrong, I might sound a little patronizing but I'm actually liking this show. And I like the opening theme so much so that you may have noticed I'm presently undertaking the production of my first AMV to it.
Posted by akuyume at 7:51 AM No comments: