[Shana]Preview of my first AMV project

Here's a preview of my aforementioned AMV. :)

Someone asked me if I have a deadline for completing the video. Not really, I just want something to work on that feels productive. Up 1:24 of video, that's the beginning of the song all the way through the part I used as a "preview." Of course the song is 6:11 so I've still got a bit to go before its done.

Its a harder process than I might have assumed, I've listened to the song plenty of times and read the lyrics even more now in both Japanese and English trying to find parts that make me "see something" and then I search through all the hours of the video I have to find clips I want. And then there's the processing... the last few builds actually took a few minutes to encode.

One issue I didn't expect is that the software I'm using for video doesn't support playing sound from videos. It supports sound in the videos, it just won't play it. So I've got to open my audio in a separate program to "measure" the music.
Posted by akuyume at 12:07 AM No comments:

I've decided its about time I finally make my own anime music video. The song I've decided to make one to isn't anything I'm too familiar with actually. Its AIR's opening theme, Tori no Uta. I have seen an episode or two of Air, but I just stumbled across the song surfing YouTube; and here's a particularly handy video with Japanese subtitles. Incidentally, about half of the video clips I've noted that I want to use are from Clannad (Clannad and Air are both productions of Kyoto Animation and based on Key games). The other half come from Shakugan no Shana. Its my first AMV, but its a great song and I've picked two animes I love, so wish me luck so that I won't disgrace it too much! hehe =)
Posted by akuyume at 5:06 AM 4 comments:

Meet DVD Flick. The first free open source software solution to catch my eye for creating DVD videos. Much to my surprise it even supports the ever-popular Matroska (.mkv) container file format. Menu creation, video and audio recoding, and subtitles are all supported. After the software has finished with this it then supports authoring and finalizing the DVD. I'm trying my first experiment with it as we speak and will hopefully update with good results after I attempt to play this on a DVD player.

Update: A few days later
Okay so it works, but the video playback was a bit choppy on my PlayStation 2. This is the only system I've tested it on so far so perhaps other players might do better, but that's doubtful in my opinion as the "chops" are very regular as in being at the exact same place. Not unwatchable by far but it was a little disappointing. Maybe I'll have better luck if I play with the settings and try again. YMMV.
Posted by akuyume at 6:38 PM No comments:

After watching both of Kyoto Animation's recent animes Lucky Star and The Melancholy of Haruhi Suzumiya, one will be quick to notice the many references to the latter which often are lampshaded throughout Lucky Star.

While most of these are noted across the net, one thing which I hardly ever see anyone else mention strikes me. Lucky Star's character Misao Kusakabe has a strong resemblance to a character we know and love from Haruhi; Haruhi herself. Eye color, hair color and usual style, and even height, relative to the other characters, match to a T. But this is with one small addition. The "cute little fangs" of Tsuruya, a.k.a. LOL Fang-tan. 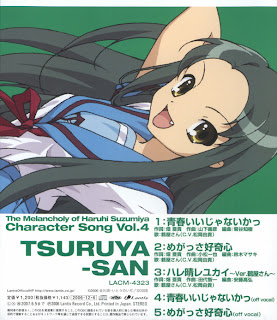 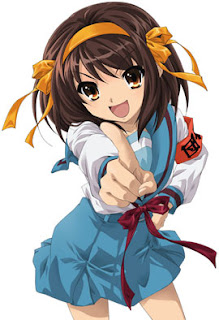 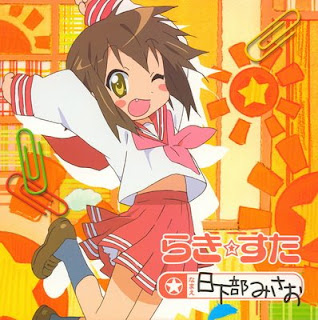 Misao Kusakabe
Posted by akuyume at 1:19 AM No comments: